These days we are flooded with forecasts.

These are mostly bullshit, in the media and online. But since many articles are written by powerful newspapers instead of the Wizard Otelma (a popular Italian TV personality), we are led to believe it. 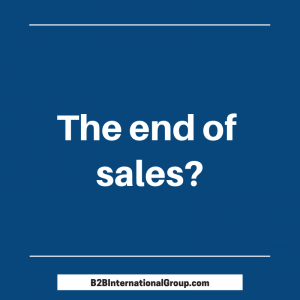 One forecast in particular struck me:

the one published by the Financial Times saying that some works are destined to disappear, including some types of salespeople. However, there will be no end to the sale process, because it will be made by computers (of course…).

And one of the works in danger of extinction, says the FT, is the insurance agent.

It can also be applied to insurance companies as well as to any other sector.

Because in my opinion, the REAL (insurance) agent will NOT disappear…

… but BUM (insurance) agents will do disappear.

What do I mean by that?

I call them “little bricks of information”.

For example, if I call the insurance company and I only hear that the price of the annual policy (my information brick) is 1,000 Euros…

…what’s the added value of having a bad salesman on the other side?

If this seller does nothing but tell me “your premium this year is 1,000 euros“, it is obvious that sooner or later, when there will be only people who know how to access the web from a mobile phone, everyone will prefer to read that amount on a site and maybe save 200 euros, instead of hearing 1,000 euros from a mere “order taker”.

I come to the point:

In the insurance sector as well as in any other business.

It will be a Darwinian selection.

So, who is the real salesman, the one who will survive any technological shift?

… the one who helps the customer to save time…

… the one who also knows how to make the customer spend more than expected but giving him in return something that helps him infinitely more.

For a real salesman, the end of sales will never come.