But the two examples I’m about to show you will make you understand two things:

The first thought comes from an instructive case for which I thank the marketing of Volvo.

As soon as I saw the video, I immediately sent the link via WhatsApp to my friend Fausto, who has a transport company.

And he answered me:

“The anti-collision. Even the Scania I just caught mounts it”.

But in the market, in your opinion, who CAN be the leader in anti-collision safety?

Who has always been positioned in the head of anyone with a driving licence, as the Number 1 Brand in terms of Safety?

“The anti-collision. EVEN the Scania I just caught mounts it”.

I deduce that some of the other manufacturers also have an anti-collision system.

And maybe – I don’t know that market – someone got there even before the Volvo.

But I’d bet that Volvo was the first to spectacularize the concept, and so it became the leader of anti-collision functionality.

It has positioned itself in the minds of customers. It’s branded.

All the others are emulators.

“ALSO” means “FOLLOWER”, in the minds of the users in the market.

What do I mean with that?

Positioning and branding, however, are not “modern” concepts. Not at all. They have always existed.

This is demonstrated by this other emblematic case, which dates back to about a century ago (!)

It was the first case of courageous positioning that went against the status quo.

Even today you could use it in YOUR market, almost literally.

Follow it carefully because it features a great teaching that could be extremely useful for your positioning and for your brand.

Positioning and branding in the early 1900s

When Claude Hopkins, the legendary marketer of the early 1900s, took on the task of relaunching the Schlitz beer brand, he did so with a campaign that went down in history. 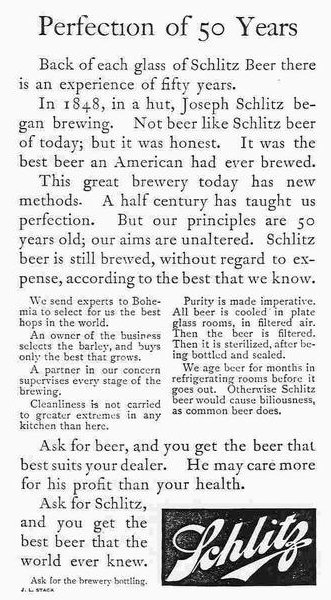 It simply tells the production process to highlight the quality of the final product.

“But what do we tell them to do? All brewers make beer like this”…

Luckily, however, they trusted Hopkins, and their brand became the market leader.

How to do positioning and branding for your business

Isn’t it by any chance that you’re unwillingly undergoing some sort of self-castration?

It’s not that you’re acting like the managers at Schlitz, who said “but we all do that… what’s the point of going to tell it?”

what are you doing to position yourself as a leader in your market?

Choose a niche in which you could position yourself as the No. 1 and communicate it to your market with persistence.

Little by little your company will position itself as THE ONE THAT___, and this will help you to remember your brand more and more.

Want some advice on what to do for your company?

Book a free Strategy Session here with one of our experts: