As the following story shows, there are bad habits also in the lead generation process.

Once upon a time there was a piglet that had never washed himself.

In his house he had never seen his mother, father or older brothers wash, so the idea of taking a bath or a shower did not even touch him.

When he started attending primary school, all his classmates avoided him because of his bad smell, and never invited him to birthday parties.

But the piglet had always been raised like this, without washing himself. So, it seemed quite normal to him to continue behaving in the usual way.

One Friday, while going to school, he met a monkey… 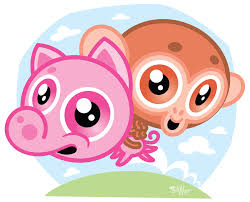 The monkey didn’t notice how much the pig stank because she had a cold, so the two made their way to school together and became friends.

The piglet couldn’t wait for Monday to come all weekend, so as to go back to school and see his new friend again.

But when he met the monkey he had a bad surprise.

She had healed from the cold during the weekend, so she immediately sniffed the piglet’s bad smell. She looked at him disgusted and asked him why he smelled so badly.

“I don’t wash myself. Everyone at home has always done this way”.

The monkey was incredulous and kept at a distance from her friend, so she wouldn’t smell it.

At school exit, the piglet and the monkey found the road full of puddles because it had rained. One of these puddles looked like a small pool, although it was wide and deep and surprisingly clean, so the monkey did not think twice and jumped into it, dragging the piglet with her.

At first, the piglet was disoriented.

Then, seeing how the little monkey enjoyed herself, he started acting like her, and soon he got used to it.

From that day on the piglet got used to water, began to wash every day, stopped smelling, and made a lot of new friends.

If “you’ve always done that”, it doesn’t mean that your habits are the right ones.

This is true in life, as well as in business.

The same is for lead generation, which is the essential activity for companies that want to acquire new customers.

Maybe there is something different that you have never tried, something that could make you acquire a lot of customers that you are now missing.

Or you could do the same things, but with a different approach: how many times does the same bike or racing car, in the hands of a different rider, produce different results immediately?

It’s the same for lead generation.

If you’re open to considering a new strategy that can give you immediate and very different results, watch this video: