Home » Blog » Strategy » Launch of a new product: how to make your business fly high

A couple of days ago Seth Godin (one of the best marketers in the world) published an UNMISSABLE post, especially if you have to deal with the launch of a new product or a particularly innovative and revolutionary idea.

Godin clearly explains it in his wonderful post, focused on this image: 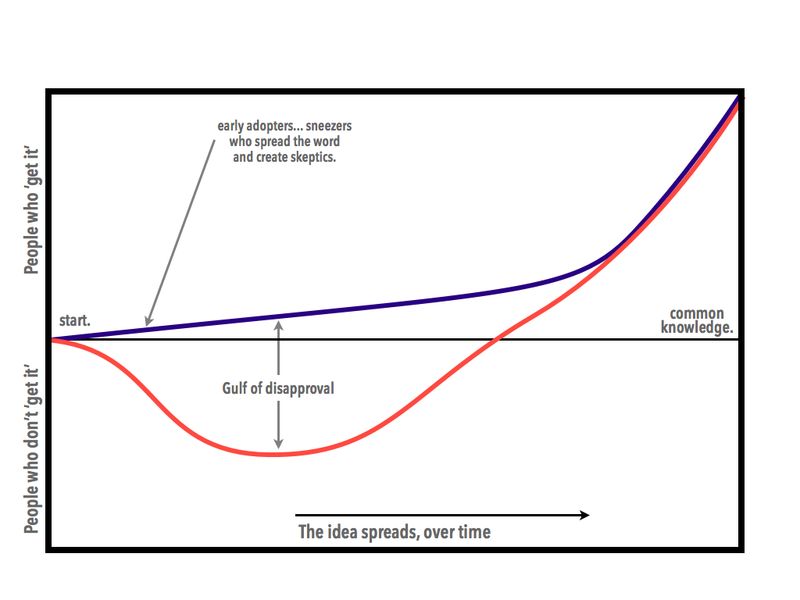 Every new idea/product/innovation/etc. is immediately well received only by a minority (these are the innovators and the “early adopters” also mentioned in the cult book “Crossing the Chasm” by Geoffrey Moore).

But there’s always a majority working against them, for a series of reasons that makes them refractory to any news. And as Godin says, this has always happened: the phone, the web… and even rap music.

(Personally I remember when in Kodak I urged the EDP Manager to set a meeting with a well-known email provider, to move from an internal messaging system to emails, that could open us up to the world. They thought I was a fool).

Since the second ones (the red line) are much more than the first ones (the blue line), at this stage the risk of leaving the project and being defeated by disapproval is very high.

Anyway, sometimes persistence wins: Blues convince Reds one by one, taking them to their side and thus sanctioning the definitive consecration of innovation.

So, your business can finally fly high.

So, Godin says: when you see that the trench gets deeper and deeper, don’t care about the red line; only consider the blue one.

How many times do we abandon a project because they tell us that:

– my market is different;

Next time a customer tells you this, and so unknowingly tries to take down the launch of a new product, just know he’s a Red.

Keep looking for and doing business with Blues, and spread your new idea through Blues, even if they are still few. Sooner or later they will convert many Reds.

About Blues and Reds, let’s talk about the use of the web in a traditional business…

… if you missed the opportunity last week, from this morning you can still move to the side of the Blues: Marco Scabia (the Bluest of the blues) has exceptionally reopened the registration to his Internet Business Academy. IBA is only open until 24:00 today, Monday 30.