Home » Blog » Branding and Positioning » Language and differentiation: the Polyphemus and Pataponfa Game

Imagine requisitioning your cell phones and organizing a children’s party like this:

Compared to texting next to each other like robots, it would already be a different party…

But there are those who have done better: 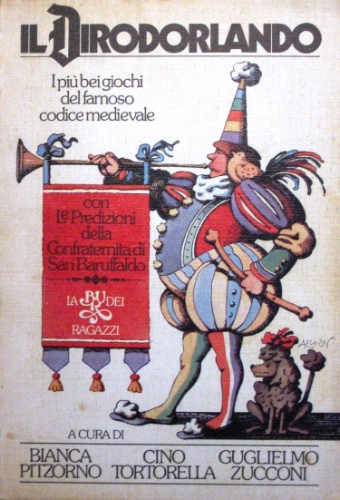 In a word: Dirodorlando (An Italian television game for children in the 70s).

Whoever was a kid in the early ’70s will surely remember that TV show.

It was a legendary team game, both in name and de facto.

The authors had created a medieval setting, where everything had a different name. And just for this reason everything took on another colour and flavour.

Simple common games with a particular name and wrapped in this unusual context acquired a unique charm.

This is for example the “Game of Polyphemus”, which was part of the Pataponfa.

The name comes from Polyphemus who, blinded by Ulysses, felt the sheep one by one when they came out of the cave to count them.

So: you put 15 objects in a bag (pens, cases, anything). Each player puts his hand into the bag without him seeing and has 1 minute to feel and understand what objects it is. At the end he writes them down on a piece of paper. The winner is the one who guesses the most.

But why am I telling about Dirodorlando?

Because the success of that show shows how words matter to position your company, or your product, or yourself.

The program would not have had the same success if it had been presented as any competition between two teams of kids. Instead, it was positioned as a duel, with invented names, in an imaginary world.

And this formula decreed her success.

The differentiation formula is one of the topics we explore in Module 1 of TheSystem, dedicated to the importance of creating clear positioning and an effective commercial message.

This is the ink to learn more (and to possibly make us earn the Ciangottine):