Home » Blog » Sales » The Chubby Trio and Voltaire: Is there a perfect sale?

the answer to the income quiz has been postponed to tomorrow for the chubby archer girls’ case.

Yesterday there was a great media pandemonium for the title of QS, a sports newspaper, which the day before had titled: “Il trio delle cicciottelle sfiora il miracolo olimpico” (“The trio of chubby girls come close to the Olympic miracle”). 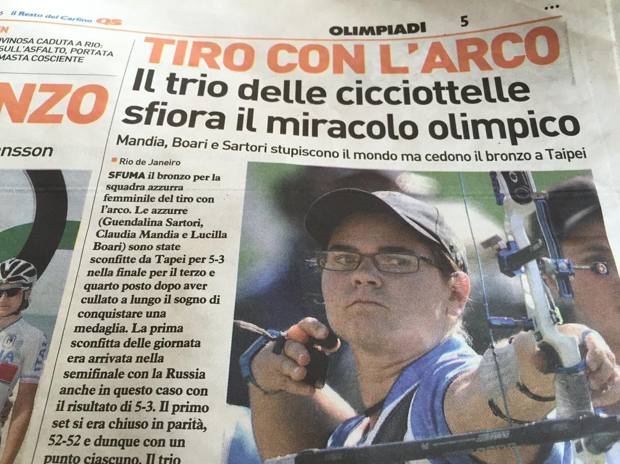 Along with the director’s dismissal. I would have fired him too, but for a completely different reason.

If you work in an office, nobody gives a damn if you’re chubby.

If you’re a well-placed opera singer, nobody calls you chubby.

But if you show up at the Olympics with a roll of fat, everyone notices it.

And the rolls of the three girls, being athletes who participate in an Olympics, jump to the eye. Who knows how many people thought so when they saw them at work.

The same goes for the other Olympic athlete, Giovanni Pellielo, silver medal in skeet shooting after an endless playoff: I doubt he is appreciated by the ladies for his abs. We could also call him “old man”, since he is 46 years old. But he’s not an old man at all: he’s an “old man” compared to the stereotype of an athlete.

But if in the end the fat or age does not affect your results, who cares? If you can be the fourth, second or first in the world without being perfect, who cares?

This is the positive message that the media dust has clouded:

You can excel without being perfect.

In fact, I would have fired the director for not having highlighted this positive aspect, not for the bad title.

Even in business you can be competitive without being perfect.

Is your “aim” to choose a list good? You do the right things, but without being paralysed by the desire for perfection.

Do your “firm nerves” consist of conducting negotiations until the order is closed? Do the right thing, but don’t worry about always having to make the perfect sale with a miraculous answer for all customers.

Voltaire said it too: “The best is the enemy of the good”.

tomorrow, unless there are new sensational ideas from the Olympics, I will give the solution of the quiz on income. No exact answer so far, so the ultralight ball is always up for grabs.