Home » Blog » Internet Marketing » In the beginning there was Quality. Also in Telemarketing. Then?

In principle it was Quality. Also in Telemarketing.

When Quality was a value, people worked well, companies produced quality products and services, customers did not complain, and everyone was relatively fine: customers, suppliers, staff.

As in Rock-paper-scissors, Quality won over Efficiency.

And because it’s easier and faster to increase Profits by reducing costs rather than increasing turnover, companies began reducing internal costs and asking for ever greater discounts from suppliers.

In short, a spiral has been triggered in which everyone has cut back on raw materials and service levels.

As in Rock-paper-scissors, Profit began to win over Quality.

Mine is anything but a fine economist’s analysis, for God’s sake. But you just have to look around to see what’s going on.

But why do I say that?

Because in the last few days I was sorry to find this photo from an article in the online version of the Corriere della Sera: 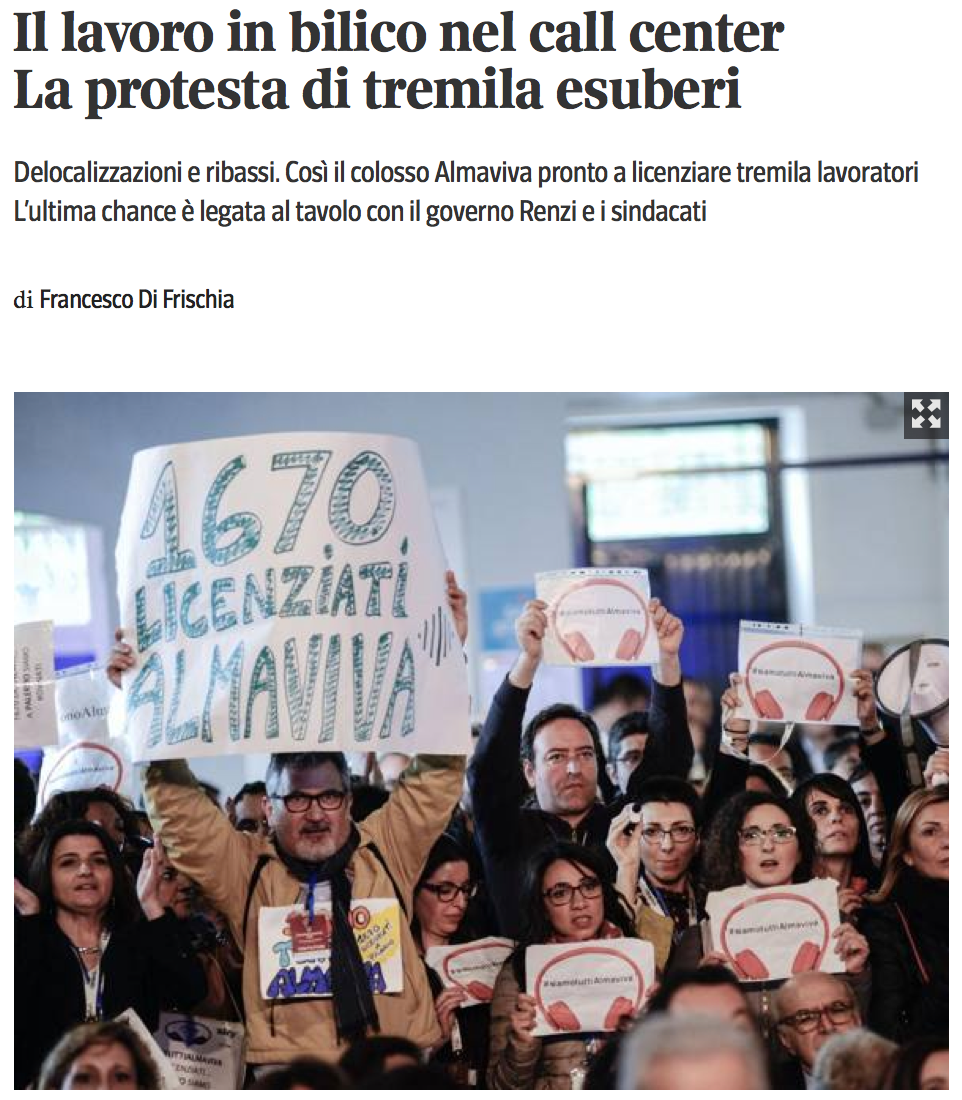 I’m very sorry for everyone involved and for the company. I don’t know the situation, but I suspect there’s a connection with the above spiral.

It won’t be the case of this company, and I absolutely don’t want to generalize, but the prices that many call centers charge, the quality that they offer, the low professionalism of the staff that they can attract at those prices (or the annoyance that they generate in people with better profiles, who feel underpaid and underused), the assembly line approach of their calls … in short, all these factors recall the negative parable that I described at the beginning.

And there’s more: all of this has contributed to ruining the entire telemarketing market.

By now “telemarketing” is a dirty word.

And I don’t see any way out. There’s no coming back.

That’s why for some time we abandoned the use of telemarketing for its own sake, as still call centers and many other players do, and instead we have placed it in another container where Quality is still the reference.

We have also given a name to this container that we have created, and for which we have the exclusive recipe: it is called Lead Generation Farm™.

In the new ecosystem, unlike call centers and other operators, our customers’ prospects aren’t an indistinct mass of numbers without a name, to call constantly until someone for statistics falls into the network …

…they are people to be sown, irrigated and fed lovingly week after week, just like a passionate grower cultivates his land.

We certainly contact these people also by phone, but NOT ONLY by phone, and in any case we never harass them like those who use telemarketing the old way.

So we don’t make people hate us. And we don’t let our customers make a bad impression.

We make sure that our cultivation brings these seeds to maturity in a natural way.

Does it work better than pure telemarketing?

Does it do wonders?

Is it right for everyone?

Yes, but we only sell it as a service to certain types of companies.

For all the others we have sold the recipe, and everyone can cook it themselves.

Does it cost more than telemarketing?

In fact, only multinationals or large and medium Italian companies (rarely small ones) can afford it.

Where can I find out more?