The proverb wasn’t exactly like that, it’s adapted to local customs. 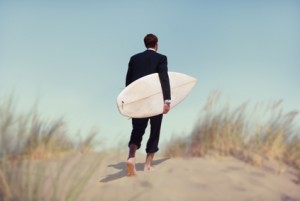 It seems that even today there’s still a lot of scepticism about investing time in sales in August.

Yet, it’s very satisfying to close orders in August and then go to the beach for a few days.

You should try it!

If only because it’s decidedly humiliating to see that all the reference European countries work, produce, sell even in August and instead, we are anchored in the old beliefs that we are a people of August lazy bums and we hesitate, fearing that everyone is on holiday.

I am not. B2B International is not. You are not, or maybe you are, but you are indeed reading this email.

Your wife or husband may get angry because you swore and persuaded him or her that you wouldn’t work on holiday, but you can always say that you prefer our blog to Mr Grey’s adventures.

And speaking of proverbs and popular wisdom, I report some that support our theories:

Hoe the vineyard in August if you want to have good must.

August ripens us grain and must.

August is definitely a great month for LEAD GENERATION, as is July.

The leads ripened in July can be converted into orders in August because not everyone is on holiday and those who are not, because maybe they have already gone or will have to, are much more receptive to suppliers.  The phone doesn’t ring, they can listen, think, evaluate, make decisions that they can’t make during the frenetic winter routine.

And so on, the leads that ripened in August along with the wheat are business opportunities for September, so that autumn can begin well.

I’m going to allow you to get a little tired with this topic because I want to convince you that starting lead generation projects in the summer months is a great idea.

Let the prospects receive our contacts to generate leads, since that your competitors are there waiting to find them available in September, when the vortex of recovery will have caught them up.

I’ll tell by the clicks: